Olin Corporation (OLN) is a chemical and ammunition company. That’s an odd combination – but it makes for two great businesses in one company.

The chemicals business makes must-have stuff for a variety of products and industries, including – and this is really big right now – chlorine for pools.

Chlorine is in huge and further surging demand right now, and Olin is the go-to company for it.

Then, ammo is used for sporting use and the military.

The outdoors is calling now and into the fall, and Olin is loaded for game. And the military here and beyond is always needing more stuff to fire.

Sales are exploding right now for Olin. The last quarter alone – revenue is up by 79.0%, and it is a big surging trend. 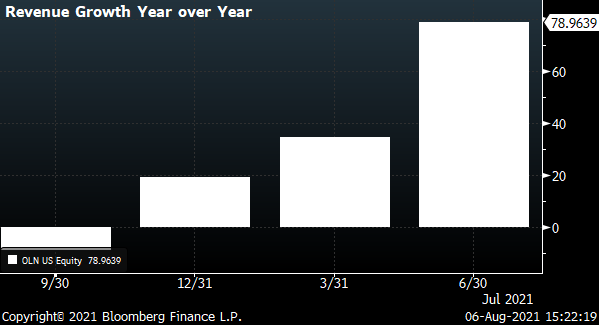 Now, here’s the chart for the trade set up for Olin.

And here’s how Olin sets up with its SSI score:

Olin is one of the best-performing stocks in the market over the last 12 months.

Shares have been consolidating in the mid-$40 range for most of the summer.

Two weeks ago, the company reported blowout numbers. Sales soared as noted above, and earnings came in 53% above analyst estimates.

I’m looking for a move above the post-earnings high that should trigger a second wave higher.

Burlington Stores (BURL) runs deeply discounted clothing sales. It is a must visit for families getting ready for back to school – more so for this year.

Folks need to move from sweats and pajamas to actual clothes and jackets and beyond, and this is where the company is set up with the right stuff at low prices.

Sales were terrible last year – as no one needed stuff. Now they do.

And the last quarter shows a massive sales surge of 173.6%.

Here’s the trade set up on the chart for Burlington:

And here is how Burlington scores on the SSI system:

Retail stocks are booming, and Burlington is no exception.

Consumers with pockets full of stimulus money and a year-long case of cabin fever are flooding brick-and-mortar stores.

Last quarter, analysts were expecting earnings of $0.83 per share from BURL.

The company earned more than triple that estimate.

Burlington is scheduled to report this quarter’s results in 25 days, and another blowout number could send shares soaring higher.

I’d like to have a decent open gain by then, or even book some profits before the announcement.

Most of these items were not what folks wanted or needed when they were staying at home and working from home.

But that’s then – now, we’re getting out and getting back to business. This means getting dressed and wanting watches and other items to wear.

This shows up in the sales turnaround – and I mean turnaround.

Sales were down, down and down more earlier this year and for last year. But now, sales are surging with the last quarter report showing a surge of 93.5%.

Here’s how the trade sets up with the chart:

And here’s how Movado scores with the SSI system:

This small-cap watch-maker is up almost 90% year-to-date despite trading sideways for the last four months.

I actually had this stock on our watchlist back in June, but the trade never triggered.

Volume has been drying up the last few weeks – a sign that less supply is coming to market and shares may be getting accumulated by long-term buyers.

Combined with a low float of just 16.63 million shares, any increase in demand for MOV could send shares flying.

This is an advertisement for online information courses, workshops, classes and other educational programs relating to finance and investing. It is not an advertisement for investment advice. Pursuant to FTC regulations and federal law, Traders Agency, LLC intends for the information in this advertisement to be truthful and not misleading. Accordingly, any and all readers of this advertisement (this means you) are fully informed that none of the information, material, or courses that Traders Agency, LLC offers constitute investment advice as defined by the SEC and by federal law. These materials do not take into account a subscriber’s (this means your) particular investment objectives, financial situations or needs and is not intended as a recommendation, offer or solicitation (this means to you) for the purchase or sale of any security or investment strategy.

Under SEC regulations and federal law, the purchase, sale, or advice regarding any security, other financial instrument or system can only be performed by a registered/licensed industry representative such as, but not limited to, a registered investment advisor. It is very important todo your own analysis before making any investment based on your own personal circumstances.

Investing involves substantial risk and results are not guaranteed.

Neither Traders Agency, LLC nor its principals or affiliates are registered investment, legal, or tax advisors or broker/dealers.