Bubbles burst. I know it, you need to know it. And I am here to keep you away from their pains to your portfolio and at the same time give you real deals that surge your capital with my Surge Stocks.

Now, let me tell you about how bubbles happen and how to stay away from them to invest better.

Market bubbles have been happening for hundreds of years.

The first notable example took place in the Dutch Republic during the 17th century.

At the peak in 1637, single tulip bulbs were selling for 10 times the annual income of a skilled artisan.

But in the heat of the action, even the smartest people succumb to the fear of missing out.

Not long after in 1720, South Sea Company was the hottest stock in England.

After seeing his friends get rich on its meteoric rise, Sir Isaac Newton bought in big.

When asked about it later, Sir Isaac Newton stated that he “could calculate the motions of the heavenly stars, but not the madness of people.”

For the rest of his life, Newton forbade anyone to speak the words ‘South Sea’ in his presence.

Today’s rise in cryptocurrency prices has a lot of similarities to bubbles of the past.

In fact, if history is any indication, we could be on the verge of a serious crash.

You see, every bubble has 5 distinct stages. And recognizing those stages early is the key to getting out in time.

Displacement refers to a disruption of the status quo, usually in the form of an innovative new technology.

Bitcoin and its crypto cousins definitely fit the bill.

This attracts widespread media coverage, often accompanied by a lot of “if you had invested $1,000 in a few years ago it would be worth…” statements.

FOMO (Fear Of Missing Out) takes over as speculators fear missing out on a once-in-a-lifetime opportunity. Bitcoin went through two boom phases – one in 2016-2017 and another from 2020-2021.

And Bitcoin mania is not done as prices are up 504% over the last twelve months. But it will be and it won’t be pretty.

Caution is now thrown to the wind.

There is no price too high, and all rational arguments are disregarded.

In this stage, the “smart money” begins to sell and collect profits on their speculative trades.

They see the warning signs of a pending bubble and wisely exit before the bubble bursts.

In my opinion, this is where we are in the cryptocurrency bubble.

In the final stage, the once shiny asset begins to lose its luster.

Suddenly, the upside is no longer guaranteed.

Even a minor setback can be the needle that pops the bubble.

It could be a new regulation, selling by a major holder, or some other flaw that reveals a chink in its armor. Or it could be an off-hand diatribe from someone – such as Elon Musk yesterday. His short comment about electricity consumption of the whole Bitcoin universe sent the coin plunging by 15.98% in minutes – wiping out billions of dollars from Bitcoin’s most faithful wallets 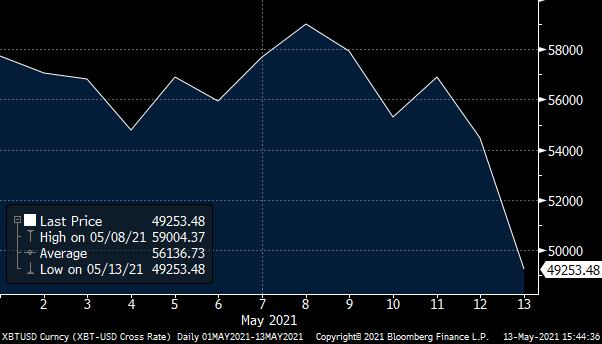 Just as Musk proved – prices reverse course and generally fall as rapidly as they climbed.

It is impossible to say definitively that crypto is in a bubble.

What I can say is that it looks like every other bubble we have seen for the last 500 years.

One of the most blatant examples is Dogecoin.

It started as a joke.

Today, the coin is worth more than Ford Motors. 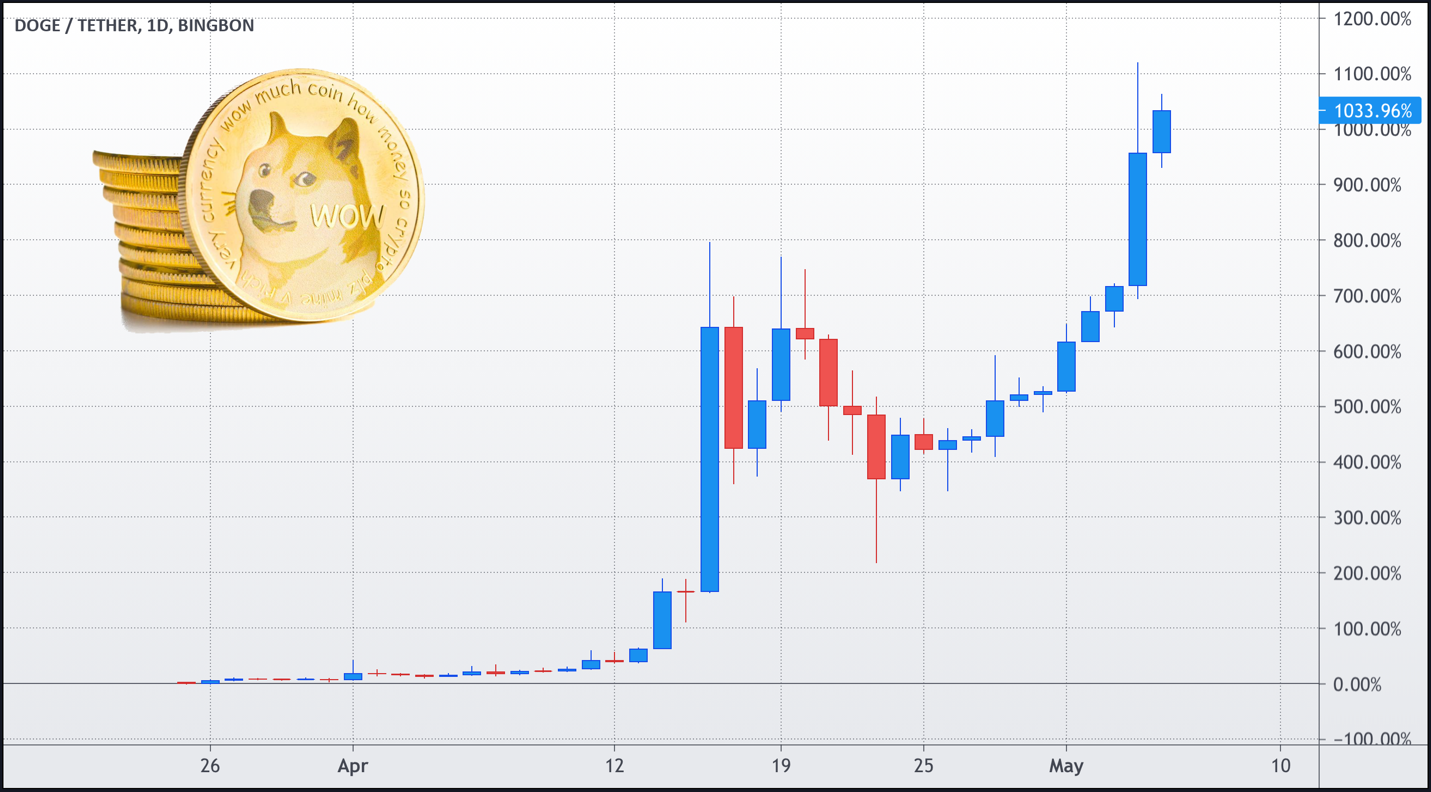 In my opinion, this won’t end well for investors.

They would be better off investing in stocks.

The same life-changing gains can be attained in the stock market.

You don’t have to gamble your savings on a piece of computer code whose value is dictated solely by euphoric speculation.

Too many folks have been conned into the belief that cybercurrencies are the only way to truly get rich. But as I’ve just noted, that’s a true fool’s errand. Instead, I’ve found plenty of stocks that have real assets and real revenues that have driven investor’s investments to surge much, much higher.

Take these as examples…

The trick is to invest in the early phase of a new company or technology.

To buy in the displacement stage – before everyone is talking about it.

Those who recognized the potential for cryptocurrencies five years ago have been handsomely rewarded.

You can achieve the same success.

But Bitcoin is not the way to do it.

Instead, in my Surge Stock Daily, I will keep bringing you surging stock after surging stock that will make Bitcoin look like lost change on the pavement.

I’ve already given you stocks like BlueLinx (BXC) that in a mere two days has surged by 11.29% and there are plenty more like this one on my dashboard that I will bring you over the coming days and weeks. My Surge Stock Indicators (SSI) is a powerful set of tools that I use every single day to bring surging stocks right to your inbox daily.

And to fully learn how surge stocks actually happen and how I find them to trounce Bitcoin, Dogecoin and any other sort of “coin” – you need to download and read my special report: The Magic of the Stock Surge Indicator that you can do right now, right here. That’s it for now, but I’ll be showing you more SSI Surge stocks to buy. So be sure to open and read my Surge Stock Daily.

This is an advertisement for online information courses, workshops, classes and other educational programs relating to finance and investing. It is not an advertisement for investment advice. Pursuant to FTC regulations and federal law, Traders Agency, LLC intends for the information in this advertisement to be truthful and not misleading. Accordingly, any and all readers of this advertisement (this means you) are fully informed that none of the information, material, or courses that Traders Agency, LLC offers constitute investment advice as defined by the SEC and by federal law. These materials do not take into account a subscriber’s (this means your) particular investment objectives, financial situations or needs and is not intended as a recommendation, offer or solicitation (this means to you) for the purchase or sale of any security or investment strategy.

Under SEC regulations and federal law, the purchase, sale, or advice regarding any security, other financial instrument or system can only be performed by a registered/licensed industry representative such as, but not limited to, a registered investment advisor. It is very important todo your own analysis before making any investment based on your own personal circumstances.

Investing involves substantial risk and results are not guaranteed.

Neither Traders Agency, LLC nor its principals or affiliates are registered investment, legal, or tax advisors or broker/dealers.